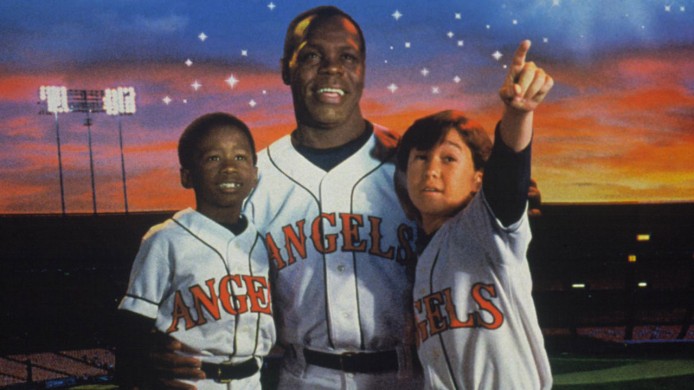 I remember liking AITO when it first came out, but I was also twelve-years-old and liked eating Kid Cuisines and sucking my thumb, so I’m pretty sure if I watched it today, I would hate it. Plus it was Disney, so that’s even more reason.  But that doesn’t mean there haven’t been some pretty great baseball movies.  For every Rookie of the Year, there was a Major league.  So in honor of the 20th anniversary of the release of Angels, we are going to discuss some of the most awesome baseball movies of all time (that didn’t suck).

If you live in Ohio and grew up watching the Cleveland Indians, there’s probably a very small chance you haven’t seen this movie.  When I was a kid, my late grandfather visited our house with a bootleg copy, and since that first time I have seen it, I must have watched it at least twenty more times (I just watched this again last weekend on Netflix).  In the story, the owner of the Cleveland Indians dies, and after his wife takes over the team, she learns that if attendance drops low enough, she will be able to move the team to sunny Florida, so she assembles the worst group of misfits she can find to fill the opening day roster.  This doesn’t prove too hard a task, as the team is already a mess, not having won a pennant in since 1946.

Of this motley crew, we have Jake Taylor (Tom Berenger), a washed up catcher with bad-knees and an obsession with stalking ex-girlfriends. We also have Ricky “the Wild Thing” Vaughn (Charlie Sheen), an ex-con with a 99-mph fastball, tiger-blood in his veins, and an attitude to match. And we have Willie Mays Hayes (Wesley Snipes), as the speedy base-stealer and center-fielder, who isn’t even invited to try-out for the team, but sneaks into practice and wows everyone by running the bases in his pajamas.  After learning that the owner had planned all along to tank the season, the lovable losers manage to band together, turning around the season and putting themselves in contention for the playoffs. And Jake Taylor proves that deep-down, all ex-girlfriends will eventually take you back, after you repeatedly break into their houses. 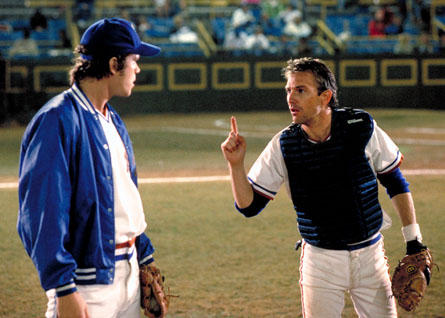 Bull Durham follows a season with the Durham Bulls, a minor league team in North Carolina.  After the Bulls sign young stud Ebby Calvin “Nuke” LaLoosh (Tim Robbins), a fastball pitcher with a limited baseball IQ, the coaching staff decides to bring in veteran catcher and ladies man “Crash” Davis (Kevin Costner) to help mentor the kid. However in the process, both players fall for a local community college teacher and baseball junkie Annie Savoy (Susan Sarandon), who every season selects a player to engage in an exclusive sexual relationship. The team has it’s early struggles, and Annie chooses Nuke as her fuck-buddy, although over time it’s made apparent that Crash would have been the better match. Crash and Annie both mutually play a part in helping mature Nuke, until finally he’s called up into the big leagues, and no longer needing his services, Crash is sadly waived from the team.

Ron Shelton (the director) was given a lot of freedom with this movie, because the studios didn’t think it would sell, and this worked out to be a good thing. The movie mixes a lot of elements successfully, it’s a comedy, it’s a drama, it’s a romance, it’s a fuck-fest in the latter part of the film for Costner and Sarandon, and here and there, there’s even a little baseball. Upon release the film did quite well critically and commercially, and Sports Illustrated even ranked it as the #1 sports movie of all time.  Do yourself a favor if you haven’t seen this it, and check it out (I do believe it is currently on Netflix). 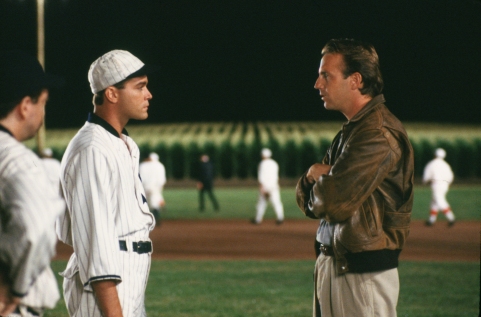 At this point, you must be thinking that this list is some kind of Kevin Costner love-fest.  What can I say, the guy has been in some good baseball movies.  Ray Kinsella (Costner) hears the now famous line “If you build it, he will come” one day while walking in his Iowa cornfield. Taking the message to heart (rather than going to a psychologist to test for the onset of schizophrenia), Ray destroys a portion of his crops on his struggling farmland, to build a baseball diamond.

He then is met by the ghost of “Shoeless” Joe Jackson (Ray Liotta), the disgraced baseball player who was linked to the Black Sox scandal of 1919, where the Chicago Whitesox fixed the World Series, although Jackson was widely considered to have not been involved.  Kinsella then hits the road, offering almost a second-chance, to certain people who have become disenfranchised by the magic of baseball, bringing them all back to his Iowa cornfield. I liked the movie, even though it does get kinda hammy at some points.  The movie is almost crafted to try to pull at your heartstrings, and at some points, if it didn’t star Costner, you would almost think it was a Hallmark Channel movie, but nonetheless this movie still earns three tacos.

Morris Buttermaker (Walter Matthau) is tasked to coach an expansion little-league team for the least athletically skilled children.  Being that he was a former minor-league baseball player, on paper he seems like a perfect fit, however in reality he’s washed up, and spends his days drunk and cleaning pools.  Realizing the teams lack of talent, he recruits his estranged ex-girlfriend’s daughter Amanda (Tatum O’Neal), to whom he has taught how to pitch in the past, and after bribing her with ballet lessons, she joins the Bears.  Her pitching skills elevate the team, however they soon also realize the shortage of runs the team produces, so Buttermaker and Amanda approach the “best athlete in the area” to also join the team, who is cigarette smoking trouble-maker and a loan shark.  Kelly Leak (Jackie Earle Haley) first refuses, then after a run-in with one of the competing team’s coaches (Vic Morrow), he reluctantly agrees to join the team.  The team begins winning games, and the “Bad News” Bears find themselves in the championship.

This movie is nearly 40-years-old, and is still extremely watchable (and IMO much better than that 2004 garbage reboot with Billy Bob Thornton). Most of the original cast is either dead (Walter Matthau died 14 years ago at 79, and Vic Morrow died from “accidental decapitation” while on set filming Twilight Zone: The Movie), or not working anymore, however Jackie Earle Haley recently replaced Robert Englund in the Nightmare on Elm Street reboot (which I haven’t seen, and I’m sure it sucks).  Bad News Bears is also currently available to view on Netflix instant.

A League of Their Own

5 thoughts on “Movies about Baseball that (don’t) Suck.”