It’s about that time of year folks!  Off in the distance I can already smell the char of barbecued ribs and can hear over yonder, rivers flowing of beer to wash away my sadness from being a Browns fan.  The NFL regular-season kick-off is right around the corner!, which also means that many of us will be meeting soon for our exciting fantasy football drafts.  In today’s unimaginably brilliant and insightful article, we will discuss the ins and outs of fantasy football, insider tips and tricks, strategies of the pros, and just about everything in between.  I may also find a way to magically work dinosaurs and/or tacos into this article so who fucking knows where this adventure will take us!

The first step of any successful draft party is securing the perfect location.  One year we had our draft party at Chuck E. Cheese, and that shit sucked.  The pizza tasted like ass, the music was awful, there were little kids playing everywhere, and worse yet, there was no fucking beer!  However I did win mad tickets playing skee-ball and got a really cool Angry Birds thermos, so every cloud does have it’s silver lining.  The ideal location would be an adult location that serves alcohol, and preferably there are no small children.

So basically I’m saying to have your draft party at the strip club.  If your wife or girlfriend has a problem with it, you look her square in the eye, and you tell her “we can always have it here!  I just need you to run to the store to get ten-dozen wings, about 5 cases of beer, a bushel of pizza rolls, and some cigars!”.  Watch how quickly she changes her tune.  All else fails, just have an on-line draft, and everyone can just sit at home and get bombed in front of their laptops.

Preparing for the Draft

Much like you don’t go into a war without a strategy (or a grocery store without a shopping list), you sure as shit don’t go to the draft and just hope to successfully “wing it”.  You’re going to end up drafting a bunch of players with the same bye-week, and odds are in the last four or five rounds, your dumb-ass ends up drafting players who retired years ago.  I’ll draft Hines Ward.  Anybody got Ward?!  How about LaDainian Tomlinson!?  You will look dumb.  My first year, I drafted Edgerrin James in one of the last rounds, and that jerk had just went into retirement.  I sent him a tweet asking him to come out of retirement so that I wouldn’t look like an idiot, but for some reason the selfish asshole never obliged.

So go over all of the players in the NFL with a fine tooth comb, and check for injuries, pending convictions, late alimony payments that might land them in jail, and all of the other normal stuff.  Once you confirm that they are in fact healthy and not wanted by the authorities, you can add them to your draft wish-list.  Most standard leagues have about 10 dudes, and there’s about 15 players on a team, so essentially about 150 people will be selected, so your list should be deep.  Or just ignore everything I just said and buy one of those draft magazines they sell at the supermarket.

Once your draft day finally arrives you are ready to head to the strip club to get down to business.  Now your first instinct may be to sit up close to where the dancers are, and you would be wrong.  You usually only get about 90 seconds to 2 minutes to make your selection when it’s your turn in the draft, and you can’t afford to be distracted.  The topless woman will still be there after your draft finishes, so cool your jets and focus here.  Choose a nice table over by the bar and fog machine, and make yourself comfortable, as the next couple of hours can be bedlam.  You’re going to be drinking a lot of beer and don’t want to miss a turn, so also don’t forget to bring a pee jug.

There’s really no perfect method to drafting your team.  Some will argue that with your picks you will need to go in a certain pattern such as Quarterback, Running Back, Receiver, Running Back, while others argue you go Running Back, Quarterback, Receiver, Running Back, etc, but not me.  I usually draft a kicker with my first pick.  It’s a good way to get the idea into the other player’s heads that this guy might be crazy, I better not touch his wings, plus being a fan of the Browns for so long, I sometimes forget that other people on a team besides the kicker actually score points.  After my kicker is secured, I move along filling in the rest of my team like clockwork.  With a Quarterback, the key is to find someone who’s got a high football IQ, is capable of making a high rate of completions, and is essentially a touch down machine.  Once again being a fan of the Browns, this sounds like a mythical creature to me, but they have been known to exist.  When picking your Running Back, it’s always important to select someone who is known for being able to run exceptionally well.  Fill in all of the positions, and you are now the proud owner a fantasy football team.  Good job, you. 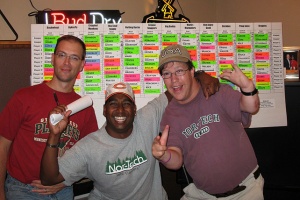 Your fantasy football team is much like a plant, as a plant requires water, sunlight, and nourishment to thrive.  If you don’t take care of and nurture your team, it will wither away, much like your dreams and aspirations in life of not letting your parents down.  It’s important to log on occasionally to switch out players who are on a bye week and are not playing, because if you don’t, everyone in the league will hate you (except for the lucky asshole who’s facing you).  Another important thing to watch is the waiver wire.  Each week you will be given the opportunity to cut players from your roster who are under-performing, and to pick up players from free agency to replace them.  Oh shit, you drafted Trent Richardson and by week four you’ve finally realized he’s garbage?  Cut him, and pick up up some other scrub who’s marginally better!  Your Quarterback is looking at a suspension because he beat up his wife again during Thanksgiving dinner?  Cut him, and pick up Alex Smith, from what I hear he’s afraid of women!

Another fun activity during the season is trades.  You can trade players with any other member of your fantasy team at any given time by sending a trade offer, and they can either accept or decline.  A little tactic I like to use, is to trash the player you would like to receive, to lower his worth in the eyes of your trading partner.  Is your friend black, and you want his Peyton Manning?  Hey did you hear Peyton Manning hates black people?  Some people, you know?  If you want to trade that stupid racist to me, I’ll totally deal you Colin Kaepernick, that homey keeps it real.  Works every time.

Now with all of this wisdom I have imparted upon you, there should be no doubt that you will go on to win your fantasy football league.  And if you don’t, oh well, sucks to be you.  As us Browns fans always say, There’s always next year!

Who’s your number one overall fantasy pick?  And if you had to be trapped on a desert island with only one middle-linebacker, who would it be?  Tell me in the comments!